SVG Maps of each state in the USA

With this plugin you will be able to display individual States of the US, fully color them or create markers. You can also display the states divided by metropolitan regions.

Here are some examples:

In this example the map of Texas is displayed and colored. When the user clicks it, a new window will open with the wikipedia page of this state.

In this example, markers were created in some of the main cities of the Washington state. On click, an alert message will display with the population.

This is a map of California’s metropolitan areas.

In this example a map with New York State metropolitan areas is displayed with some markers in chosen cities.

With this plugin you will be able to create this kind of maps on your WordPress site, using a simple administration panel: 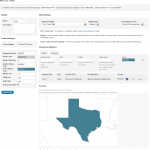 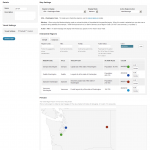 Capital Cities of the United Kingdom

This is an online interactive map with the list of the European Capitals.
When clicked, the Wikipedia page for that city will open on a new window.

Get this premium WordPress plugin today with 6 months support included.